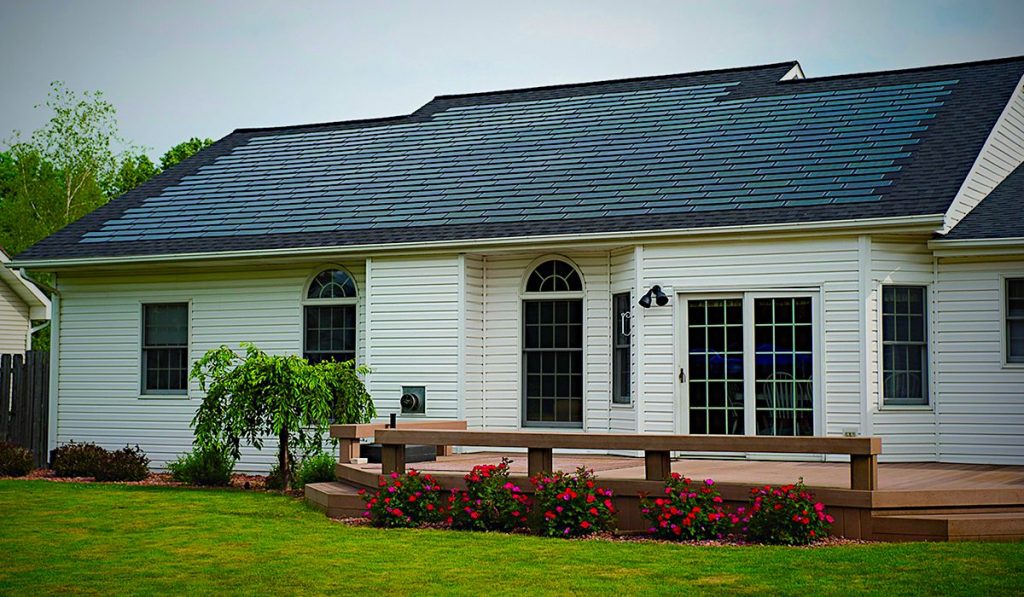 The technical acronym: BiPV stands for Building Integrated Photovoltaics. Simply put, embedding solar cell technology into building materials. For our purposes, we stick to roofing materials, or what is known as the solar shingle and/or solar tile. Especially, since these are the type of BiPV products being designed for the residential roofing and solar market.

If needing a quick refresher on solar technology (the PV part of the equation), see our piece on solar panels. There we note that solar tech is moving in a direction to product “enough electricity to power not just a few appliances, but an entire home, including transportation.” Here, we’ll show you how.

Difference between the Solar Shingles and Panels

First key difference is size. Panels are, or can be, huge. This translates into more solar modules (and cells) being installed on the roof than a shingle can currently offer.

Which leads to the next difference, power. A solar shingle produces around 15 to 60 watts, while a crystalline PV panel, typically 18 sq. ft. generates about 250 watts.

High efficiency solar panels from companies like LG, Panasonic, and SunPower can generate up to 400 watts per panel. In general, this means that a residential PV solar panel system will produce more electricity than a BiPV shingle system.

Then there’s the elegance factor. Not only are panels big and powerful, they’re big and cumbersome. They are adhered to a roof after careful surveying to make sure the structure of the (whole) house can handle the weight. Usually rack mounted, so they stand out above the roof surface. Noticeably stand out.

Solar shingles are usually near flush with the existing roof structure and becoming more of an option to be the actual roof structure with a beauty that mimics traditional roofing.

At the time of this writing, solar shingles have a metallic finish that is distinguishable from the rest of your roof, but still less noticeable than panels.

The bottom-line difference is that currently panels are more efficient and cost effective than shingles.

While shingles are more aesthetically pleasing and gaining traction to be the primary way anyone would choose to do solar power generation on their own residence.

While solar power is decades old technology and solar panel systems have been used on homes for before the millennium, the solar shingle is relatively new.

Dow Chemical first sold them in 2011 with their PowerHouse line. There’s just a handful of other manufacturers and distributors that include CertainTeed (Apollo line), SunTegra, Atlantis Energy (SunSlates), and the latest Tesla.

Dow left the market in July 2016, which is around the time Tesla announced they are entering the market. Dow was the king of the heap, but Tesla offering has been mostly a vaporware in a sense that it wasn’t widely available to the public, thus far.

It’s not possible to discuss solar shingles for the residential market, and not mention the Elon Musk factor, owner and CEO of Tesla Inc. There’s great reason for optimism with Tesla entering the market, after their acquisition of SolarCity. However, they aren’t officially distributing product yet, so there’s also reason to be skeptical. But we’ll get to that in a moment.

If you go to Tesla.com, the first thing you’re asked to consider is “Get Updates.” The latest word on the street is the product will start being more widely available in the mid-2021.

Next on the site comes the announcement of the Powerwall 2 and the Tesla Solar Tile Roof. Or as Musk would put it, his desire to make all roofs beautiful, affordable, and powerful. Via the solar glass shingle of course.

The Powerwall 2 is the second-generation battery pack for the solar roof. It ought to be made clear that Tesla is creating an off-grid solution to solar power generation for homeowners.

The Powerwall 2 includes inverter and with an accompanying solar roof, can supply power to an average 2-bedroom home, along with your electric run vehicle. Everyone has a Tesla car, right?

This makes for some monumental shifting of not just solar products in the residential market, but also roofing and home energy use. We urge you to check out the following video that uses prototypes of the solar shingles to show their ultimate status in elegance and durability.

So, How Much Does This All Cost?

The one significant drawback to the Tesla product is that no one (outside the company) currently knows what the total installation charges will be. Musk has indicated the Tesla Solar Roof will cost less to manufacture and install than a traditional roof,

Going as far as to say even before savings from the power bill. For the clay tile and slate options in their line, that’s theoretically possible, given mass production and ease of installation.

Fortunately, the other manufacturers that currently do have product available in the market, and who will be Tesla’s competitors, provide us opportunity to explore the cost of solar shingles.

A typical installation uses 350 solar shingles for a roof, so as to generate enough power for the home. Larger homes, with presumably more energy needs, would have more shingles.

Following the recent pricing increase, you can expect to pay 50% more, which translates to $75,000-$84,000 for a typical 2,000 square foot roof. The installation must take into account electrical work, electrical and building permits, provisions for warranties, etc.

You can obtain a 30% rebate if you install a qualified solar power system in this year and through 2033.

So, $75,000-$84,000 then becomes approximately $52,500-$58,800 after the federal solar investment tax credit rebate. If you add in the savings on your energy bills, which on average see a 50% reduction, the approximate $60,000 number gets even lower, and lower, over time. Yes, you still have a significant upfront payment, but not going solar means you still pay 100% of your current energy bills.

And all of this assumes you are staying on the grid or relying on your regional utility company to produce power when the current lot of solar shingles isn’t producing enough output for your needs.

Within even 10 years, the idea of not covering your entire roof with solar shingles to produce all the power your home will need will quite possibly be considered very old school. Or how an iPod today almost seems like a relic of days long gone. 😉

First consideration goes back to cost and value of solar shingles installed. The theoretical ROI for BiPV solar shingles is currently thought to be between 50% and 80%, depending on the type of installation, presumably more for how well integrated and less noticeable they are.

Warranty is another big consideration. A typical asphalt shingle roof generally is warrantied to last 5 to 10 years for labor, and 20 years for materials. PV solar panels usually have a 25-year warranty.

Solar shingles are essentially too new to have a known warranty factor that can for sure be backed up, however the panels installed as much as 30 years ago still perform OK. That bodes very well for solar shingles where they could outlast asphalt shingles on the same roof.

And it’s well understood that with solar power, shingles or panels, there’s virtually no maintenance since there are no moving parts.

With panels though, there is inherently better opportunity for efficiency, as systems can be made to track the movement of sun across the sky. Can’t do that with shingles and tiles. Yet, that would also mean maintenance is more likely at some point since the mechanical gears will eventually wear down.

A caveat that needs to be mentioned is the product can’t be seen as necessary for everyone regardless of the hype. At least not initially.

If your existing roof is 10 years old or less and presumably in great shape, it would not be cost effective to install solar shingles. Even with Musk’s optimistic vision, he sees people going with solar when they need a new roof.

Therefore, the traditional (read as non-solar) roofs being installed this year, could be waiting another 25 years before justifying the shift to solar shingle. And that’s assuming the roof is of the tile variety (asphalt shingles, clay tiles, or slate).

Another caveat relates to why Dow Solar left the market. Solar panels are still the most cost effective and energy-efficient product on the market.

Dow, and much of the other players in the market today, are using thin-film solar modules. The conversion of sunlight into energy is lessened by going with these types of solar cells. Dow estimated by 2015 they’d be making $5 billion annually from this product and as much as $10 billion by 2020. Only to realize the market just wasn’t there yet, and so they abandoned the product line in 2016.

Hence, there is reason to be skeptical that Tesla can for sure do what Dow couldn’t. It’s great news that CertainTeed Solar BiPV shingles offering is in the market, as they have history as a business that’s over 100 years old. All the other manufacturers are companies that most people have probably never heard of.

Note: Given that Tesla Solar Glass Tile Roof is currently still more of a concept than a widely-available reality, we recommend checking out CertainTeed Appolo shingles, SunTegra shingles, and Luma Solar roofs to get a better sense of what other BiPV roof tile options are currently available on the market.

Finally, one might think that solar shingles could be rendered ineffective if covered. Yet, of all the elements that could conceivably cover your roof, smog would be the worst culprit when it comes to solar.

With snow, the solar shingle system could generate enough heat to melt snow as it falls, shedding the melted snow as water which all sloped roofs do anyway.

Musk has indicated he sees his tiles having built in function that would work in similar fashion to rear defroster on your car. Leaves can be blown off either by wind, or by tools we use currently to blow leaves off our lawns.

Smog, on the other hand, would leave a fine dust that would make for less-than-optimal efficiency. This would then take a washing which rain could handle but is perhaps better handled with a simple garden hose and soapy water.

As durable as solar shingles are, it would never be a good idea to use a pressure washing system on such material, especially as a light rinsing is all that is likely necessary.

If you are still not thoroughly convinced of the durability that solar shingles can provide and the kind of “abuse” they can handle, take a look at what CertainTeed has on their site about what their Apollo II solar shingle has proven to withstand.

Advantages of Solar Shingles and Tiles

Disadvantage of Solar Shingles and Tiles